Bitcoin has recovered nearly 13% after scraping its knees on a new 2018 low, but is the current uptick in momentum just a relief rally or the makings of a bullish reversal?

After scraping the bottom of the barrel last week, Bitcoin appears to have mustered enough short-term momentum to attempt a bull reversal but, at the time of this writing, this is yet to be determined.

The general outlook for Bitcoin remains overwhelmingly bearish as the cryptocurrency is roughly 70% down from it’s all-time-high and most long-term indicators remain biased toward bears.

Bitcoin remains in the descending channel and prior to the most recent developments, posted a continual series of lower lows and lower highs. As is typical for BTC, after posting a bullish outside day candle, the cryptocurrency tends to trade somewhat indecisively for the next 48 – 72 hours before making a break lower or higher. Fortunately, this time a break higher was favored and the cryptocurrency gained to $6,681 on July 2nd. 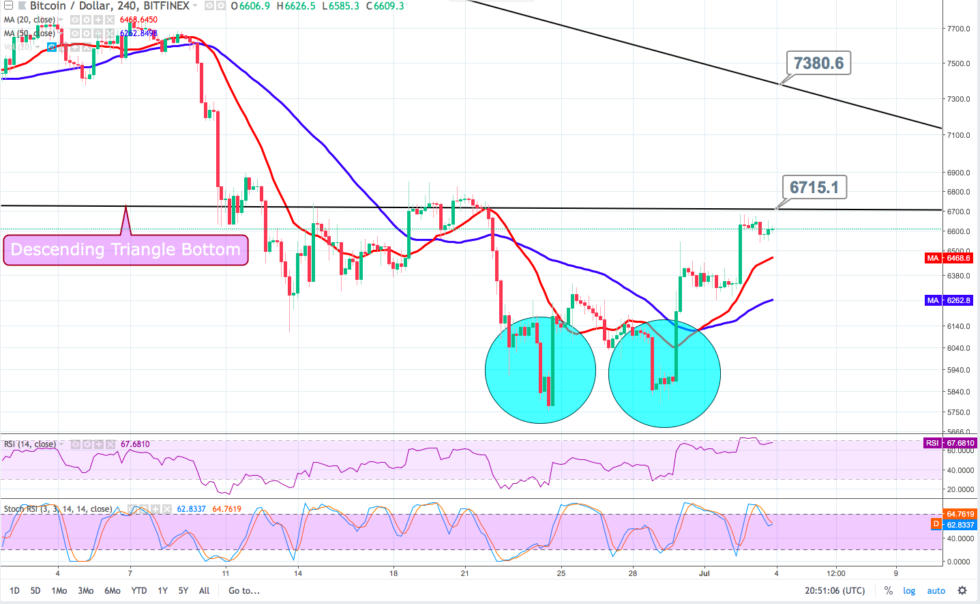 As seen on the 4-hour chart, Bitcoin formed a double bottom and broke above the neckline at $6,250 which was followed by gains above $6,500. For the near-term, Bitcoin’s outlook has turned from bearish to bullish and the break above the $6,500 resistance could prompt some investors to pursue the profits that could be gained if BTC reaches or breaks through $7,000.

The 20-day MA is above the 50-day MA and the 5 and 10 (MA) jut sharply upward since BTC posted a long green candle on June 29th. Bitcoin’s trajectory is far from set as the 1 and 4-hour charts show the 5-MA turned down and about to cross the 10-MA, while the Stoch and RSI both descend from overbought territory.

Therefore, as excitement builds we should all expect that this week pundits will forecast bull reversals and bitcoin moon theories, but investors would be wise to remember that BTC is still under the triangle bottom with strong resistance at $6,750. Bitcoin will require a high volume break to the 50-day MA at $7,117 and a move to $7,380 to exit the descending channel that has been in place since December 2017.

As a follow up from last week, investors should continue to keep a close eye on volume. With each sharp pullback, selling volume has decreased significantly which could indicate exhaustion on part of sellers. Bitcoin appears to sell off as it approaches key resistance levels and the somewhat reliable method of buying and selling on oversold Stoch and RSI is proving less effective. 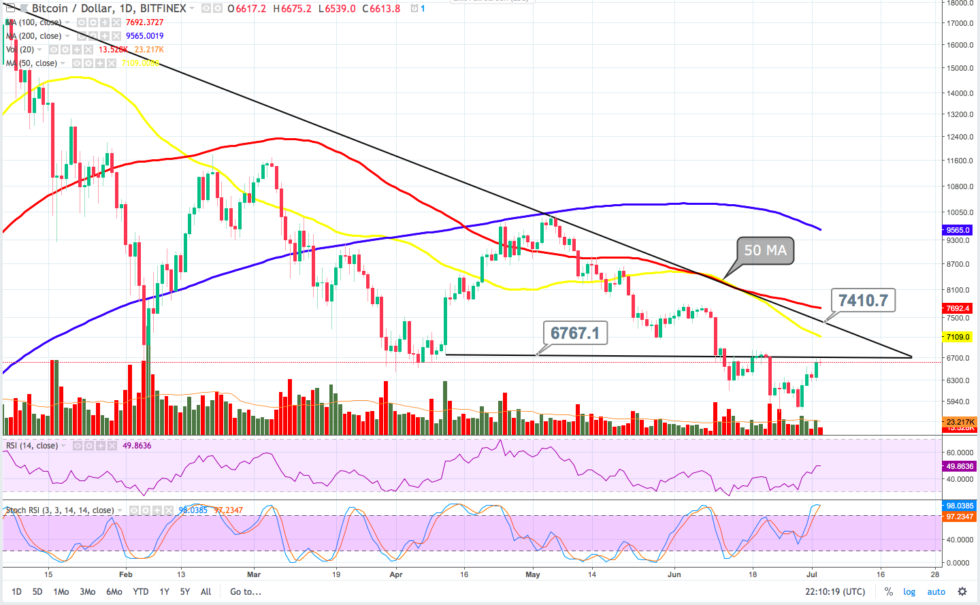 While this short-term reversal is nice and will make swing traders squeal with delight, the long-term indicators remain biased toward bears and it’s more likely that BTC will not exceed the 50-day MA and continue the downward trend toward $5,500 – $5,000.

Bitcoin looks set to test the triangle bottom at $6,767 but gains may be capped at the 50-Day MA ($7,100). Volume remains the key indicator to watch. Any positive breakout will need to be supported by sustained high volume purchasing.

[Disclaimer: The views expressed in this article are not intended as investment advice. Market data is provided by BITFINEX. The charts for analysis are provided by TradingView.]

Where do you think Bitcoin price will go this week? Let us know in the comments below!

IMF: ‘Financial Inclusion’ Will Boost Global Economy (As Long as It’s Not Bitcoin)

Without a Digital Currency, Sweden Faces the Privatization of Money